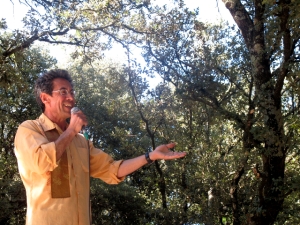 This was taken by my friend Luigi Rignanese (a great French storyteller) at a wonderful storytelling festival in Uzès, France, spring, 2011.

Dan Yashinsky is a well-known Canadian storyteller, author, and community organizer. He received, in 1999, the first Jane Jacobs Prize to honour his contributions as a storyteller to enhance Toronto’s cultural life. He also received a 2009 Chalmers Arts Fellowship from the Ontario Arts Council.  Dan founded the Toronto Festival of Storytelling (in 1979) and co-founded the Storytellers School of Toronto. He also began the longest-running open session in North America: 1,001 Friday Nights of Storytelling (in 1978). Dan has performed at festivals in Israel, Sweden, Norway, Holland, England, Wales, England, Germany, Brazil, Austria, France, the U.S., Singapore, and Ireland, as well as all across Canada. He is the editor of four acclaimed collections of Canadian storytelling (Next Teller – A Book of Canadian Storytelling; Ghostwise – A Book of Midnight Stories; At The Edge – A Book of Risky Stories; Tales for an Unknown City) and the author of Suddenly They Heard Footsteps – Storytelling for the Twenty-first Century (Knopf Canada), which won the 2007 Ann Izard Storytellers’ Choice Award.  His book Swimming With Chaucer is coming out in fall, 2013, with Insomniac Press.

Dan created and hosted Talking Stick, a CBC Radio One show that ran in the summer of 1999. He has been a storyteller-in-residence at Queen’s University, Toronto Public Library, The Stop Community Food Centre, Storytelling Toronto, and UNICEF Canada.  Dan has done much to encourage the renaissance of storytelling in all parts of Canada. His work in schools has led him to create innovative curriculum projects, e.g. the Telling Bee and The Portage Project (part of Ontario 2000).

Talking You In, a piece he created with composer/musician Brian Katz, has toured to the Barbican (London), National Arts Centre (Ottawa), and festivals in Wales, Holland, and Canada.  They have performed it as part of staff training in hospitals in Wheeling (West Virginia), Pittsburgh, and Toronto.

Dan has an M.A. in Sociology in Education from the University of Toronto, and a B.A. in Literature from the College of Creative Studies, University of California at Santa Barbara.